The Hell-Raiser's Blog: Make Your Grant Application Stand Out 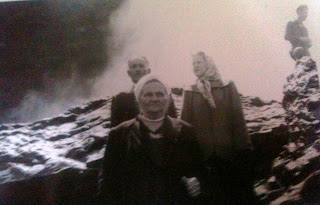 Several years ago, I received a box of family pictures. I don't recall most of what's in it, but I remember this picture of my great-grandparents, my great-aunt, and some unknown guy.

And though I have managed to blur my memory of most family events, some stand out. My Great-Aunt Florence's 91st birthday comes to mind: We are gathered around the dining room table, waiting for Auntie (in the picture's background) to cut her birthday cake. But it remains in one piece while she holds court. She is telling us about how 6-year-old Florence liked to sing herself to sleep with a Finnish lullaby about the Titanic, how she discovered that her "perky bustline" was a thing of the past, the time she got kicked out of Aldi's grocery store for fighting with another shopper who was "fondling" the French bread, and how the waitress at the Nugget "went the limit" on her date last night.

Auntie was starting in on the wastefulness of teabag strings, when my grandmother leaned over and whispered to me, "That dame never shuts up!"

Until then, I had never heard anyone use the word, "dame" in real life.

Grant application narratives can become lost in a blur of applicant information when foundation staffs evaluate mass quantities of funding requests.  In your effort to write a typo-free narrative, double-check your attachments, etc. don't forget the stories that show the soul of your organization and make your application stand out from the rest.    #grantnarratives
Posted by Lisa Arnold

Email ThisBlogThis!Share to TwitterShare to FacebookShare to Pinterest
Labels: #grantnarrative, grant applications, grants, narratives, stand out, stories
Newer Post Older Post Home
"I received an extremely grounded and practical education on ...grant writing I was already familiar with. Your insights and ... examples as well as commentary were so relevant and insightful....You were an excellent and accessible presenter..."
Mari Kim, PhD
Grant Writer
___________________