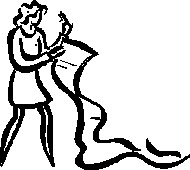 I did not know that a person could - as Mitt Romney did when he "retroactively" retired as Bain Capital's CEO - revise his/her personal history.


This changes everything. You see, I have some personal history of my own that I would like to revise.


Or this could change everything. Or maybe it already has.


Hmm. As it turns out, I did indeed return those overdue library books on the due date! And I did move my car before the parking meter ran out at 4:57 p.m. on April 17! Some folks - you know who you are - can stop waiting for me to send you overdue fees and parking fines.

I am going to have to close here. It seems there is a Nobel prize of some sort waiting for me to claim ...
Posted by Lisa Arnold

A 2nd Treasure Trove of Info: How to Promote the Vote!

Is your nonprofit organization considering the prospect of:


If you answered "yes," check out "The Underutilized - Yet Vital - Role of America's Nonprofits," Tim Delaney's 7/11/12 post (in Nonprofit Knowledge Matters,  a publication of the National Council of Nonprofits) on how to do so legally and where to find all kinds of additional related resources.

If you answered "no," check out  "The Underutilized - Yet Vital - Role of America's Nonprofits," anyway; it might just inspire your organization to promote the vote!
Posted by Lisa Arnold


It seems to me that at least some folks still associate Occupy Wall Street (OWS) with anarchists, and anarchists with bad guys who break storefront windows; the resulting conclusion is that Occupy members are bad guys. Others dismiss Occupy activists' in-the-streets protesting as a phase they'll hopefully grow out of. I think this is a costly mistake:


First, whatever you may think of window-breaking, anarchy, and the relationship between the two, is irrelevant to Occupy. No social change effort as large as OWS can ensure that each and every participant stick to the same plan.


Second, to discount Occupy is to ignore the contributions it has made, such as:
Third, to those who dismiss nonviolent, in-the-street protest as unseemly;  spectacles organized by “kids”; and distractions from the “real” work (such as lobbying elected officials or  meeting with a member of the daily paper’s editorial board), I say this:


In my experience as a community organizer, low-income and other marginalized communities do not necessarily have access to these kinds of “real” social change activities – at least not until their “spectacles” become too hard for public officials and other decision makers to ignore.


Delegitimizing OWS discourages us from more thoughtfully assessing, and learning from, its successes and failures. We cannot afford to ignore what Occupy can teach us – not when there is so much work left to do.

Did I Hear That Right?

I was listening to "Brunch With Bernie*" - a regular Friday feature on Thom Hartmann's radio program.  Here's some food for thought (pun intended), courtesy of Senator Sanders:


The richest 1% of Americans own 40% of this country's wealth


the 60% of Americans at the other end of the wealth continuum own less than 2%.

I recently read an editorial about the current grim economic and political picture confronting Seattleites. It only gets grimmer as one’s field of vision expands to include the entire nation.

Case in point: In 2009, while United Healthcare’s CEO was earning $102 million, Americans were dying at the rate of one every 12 minutes due to lack of health insurance (according to a 2009 Harvard Medical School study). And while the recent Supreme Court ruling on the Affordable Care Act is encouraging, the Act will leave approximately 27 million Americans uninsured – through 2016 and beyond, according to the Congressional Budget Office.

Case in point: In 2010, Walmart’s CEO paid its associates an average annual salary of $13,650, about what he made per hour. Per. Hour. And yet, GOP Presidential Candidate Mitt Romney has expressed opposition to raising the minimum wage.

It’s enough to make you sick. But you can’t afford it.
Here’s what each of us can afford to do: Take a cue from the Occupy movement. Call attention to economic and other injustices; participate in organizations demanding change; and make your issues and demands impossible to deny or ignore.
Whatever you think of Occupy, it’s hard to deny that its bold, persistent demands for change caused our political leaders to focus less on how to reduce the national debt and more on how to reduce income inequality.
It is that level of assertive, insistent activism that is needed to attract and involve enough unemployed, underemployed, overworked, underpaid, uninsured, and underinsured people to kick-start a movement of, by and for the 99%, and to sustain it for the long haul.

Suppose a state representative supports a bill that cuts food stamps, despite a local campaign waged by food stamp advocates to oppose it. The opponents’ strategy includes blitzing the representative’s office with calls before an upcoming committee hearing on the bill and testifying at the hearing; they want to fortify their message. There are many ways they can do so. Picture this:

The bill’s opponents recruit 100 people to go to the state capitol on Hearing Day. At noon, they gather in front of the entrance to the cafeteria where legislators, press, et. al go for lunch. They hold signs saying, “$1.50/meal in food stamps doesn’t cut it!” and “Can’t finish lunch? I’ll take your leftovers!” and “Thanks for the suggestion, but I already have a job!” They hand to-go containers (bearing food stamp information) to legislators and reporters entering the cafeteria. Shortly before the 2 p.m. hearing, they re-position themselves right outside the hearing room, so that committee members will see them.

Food stamp advocates hold a bake sale to raise money for the local food bank. They hold it outside of the representative’s office (capitol or in-district), or close to the House Chamber right before a vote. Or they hold it in front of the exclusive hotel where the representative will speak at a $1000/plate dinner-fundraiser for his re-election campaign; they sell their goods to the event’s guests as they arrive at the hotel.

Each member of the food stamp advocacy group asks 25 people to pledge $1 - to support the advocates’ work - for each time in a given week the representative is in the news, pushing his cuts. The group creates a web page that features a “Gruel Gauge” (which tracks the number of times the representative has promoted food stamp cuts, total funds raised to-date, etc.) and allows supporters to register to join the pledge drive.

Email ThisBlogThis!Share to TwitterShare to FacebookShare to Pinterest
Labels: 99%, activism, advocacy, Affordable Care Act, CEO, food stamps, minimum wage, Occupy, uninsured
Newer Posts Older Posts Home
Subscribe to: Posts (Atom)
"I received an extremely grounded and practical education on ...grant writing I was already familiar with. Your insights and ... examples as well as commentary were so relevant and insightful....You were an excellent and accessible presenter..."
Mari Kim, PhD
Grant Writer
___________________