After Occupy and the election: how to organize for real change, part one


Followed the news lately? If so, you probably have come across dramatic statements like these:
"The security of the United States and its allies — hangs in the balance." — Mitt Romney campaign
"Our future as a nation is at stake." — Jeb Bush
“The future of the American democracy is at stake.” — U.S. Senator Bernie Sanders, Independent-Vermont
"Like my father's election in 1960, this is one of those elections where the future of our country is at stake. And women and children have the most on the line." —  Caroline Kennedy
Uh-oh.
Now and then, a pundit will offer reassurance: “Not to worry!” s/he’ll say.  “They have more power and money, but there are more of us! We have people power!”
Whew! That’s a relief.
“OK. I’ll do my part,” you think. “Where do I plug in?”
Last fall, it was easy for progressive Seattleites to figure that out — Occupy Seattle drew thousands of people to West Lake Center and Seattle Central Community College. As someone with a community-organizing background, I was encouraged to see so many people publicly protesting rampant economic injustice. But now, a year later, where have all the people gone? What does their disappearance — from the park and school — say about our local people power? I decided to ask people involved with local social change work.
I met with people from nine local organizations whose work highlighted the lopsided distribution of wealth in our country. We talked about local community organizing and what has been shaping its development.
A funny thing about social change: The language used to describe it is dicey. One person’s “organizing” is another’s “advocacy.”  One person’s “advocacy” is another’s “outreach.” So when we talked, I didn’t use terms like “people power,” “community organizing,” and “grassroots organizing.” Instead I asked about the conditions that define grassroots organizing (at least to me, drawing on definitions of direct action from the Midwest Academy):


(In this piece, I will use “people power,” “grassroots organizing,” “community organizing,” and “organizing” interchangeably. All refer to nonviolent social change.)
What I found is that there is no shortage of local social change organizations doing advocacy, outreach, education, training, leadership development, research, policy development, electoral campaigning, lobbying, online social change work, direct service, coalition-building, or technical assistance. It is easy to find groups whose social change work supports or complements grassroots organizing.
It is harder to find grassroots organizing. Norm Conrad, an active member of MoveOn.org (Seattle Council) says that if half of Seattle were to suddenly want to mobilize against corporate greed, they'd have to start their own campaigns because current groups and campaigns would not be able to accommodate all of them. There's something to be said for the power of numbers, he says, "but until we get organized, it ain't worth a tinker's damn."
He's got a point: What if you organize a protest for tomorrow, at Westlake Center, and tens of thousands of people show up? Now what? How do you channel all of that energy into a campaign that is not only powerful, but also sustainable? The work of many Occupy Seattle members — like a woman named Aliana, who commuted daily between Federal Way to Seattle and spent 12-hour days doing all manner of work that needed to be done — woke up the mainstream to income inequality, made it okay to be angry, and even involved some of them in protest. Those are huge feats. But not even Occupy Seattle could build a sustainable campaign involving thousands of people — not on the fly.
According to Rebecca Saldaña, a program director at Puget Sound Sage, “This [grassroots organizing] is where the vacuum is.”
I suggested that there's a vacuum because too often people don’t have accurate information about organizing.
“Or maybe because they know too well what organizing takes.” Saldaña countered. (Organizing can involve things like asking people for money, knocking on doors, holding picket signs, maybe getting arrested, etc. It’s not everyone’s cup of tea.)
Or maybe both factors are at work. While there are groups that focus a significant portion of their activities on organizing, there are not many. If and how we grow our local capacity seems to depend on how we navigate a number of challenges, including: lack of information on organizing, lack of resources, lack of activists, and resistance to bolder resistance. This piece focuses on the information we lack to fight wealth inequality and what we can do about it. 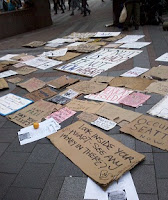 If we are going to build our people power, we will have to undo common misconceptions about organizing, to wit:
People don’t think there’s a systemic problem —  at least not one that affects them. Marcie Bowers, director of the Statewide Poverty Action Network (SPAN), points out that “the right has done a good job of making individual people feel responsible for their problems — problems that have systemic roots.” Conrad of MoveOn.org has a different take. He says it is difficult to involve more people in social change because “most progressives … are still middle class…. They see Seattle as a progressive oasis, insulated from problems."
There are people who believe there is a problem, but don’t think of organizing as a solution. The board of the social service agency whose city funding was cut, PTA parents who want the school to adopt an anti-bullying policy, and other groups like these could organize to attain their goals, but do not for several reasons:

People associate organizing with individuals and groups who break windows or wear funny hats with dangling teabags, etc. I ran into an example of this when, as organizer for a campaign to improve police response to domestic violence, I showed campaign participants photos of sexual assault protesters draped in dark cloth, hiding their identities. I said the drapes both protected women fearing retribution if recognized and made a powerful statement about their fear of rape.
One participant in the effort, Barb, blew up, as if I had confirmed her worst fears about organizing. “I am 57 years old, a grandmother, a Sunday school teacher, and a lady! I want nothing to do with this!” she declared. I assured her that choice of tactics belonged to the group (not to me); then the group assured her they had no interest in draping themselves in anything.
Months later, at a meeting to plan a protest, Barb noted that the district police commander was stonewalling, and suggested a visit to the fabric store. At subsequent protests, Barb could be seen in her drape, telling press, “I am 57 years old! A Sunday school teacher and grandmother! I should be picking up an extra shift at work or preparing for Sunday, but if this is what it takes [gesturing to 40 picketing women in drapes] to get better police response, then I will be here, as often as necessary!”
Organizing can be like getting a smart phone; it’s tempting to dive in before consulting the user’s manual. This can lead to mistakes.  I know of one group, at the time a brand-spanking-new organization, that relied on its website to recruit volunteers to go door-knocking. On a Saturday morning. To get petition signatures in support of a highly controversial issue. The group even rented several busses for the door-knockers. Not one person showed up.
Another example of what happens without training: teabags. The trained organizer would be able to tell the teabag-wearing folks that you use over-the-top tactics to make the other side and their position look silly — not your own people.
What can we do? We can get the 99 percent’s attention. Now.
We need all hands on deck immediately. The election is just under six weeks away.. And the day after the election, we will need all hands on deck  immediately because, whoever wins the presidential, Senate, and House races will — still ­— be answering to big, moneyed interests at the expense of the people’s interests.
We can highlight what’s at stake. According to Wim Mauldin, lead organizer for the Sound Alliance, engaging people's self-interest in order to mobilize them is a huge challenge. Agreed. Many well-intentioned people suffer from “I-can’t-deal-with-it-now” syndrome (i.e. some version of: “They’re cutting my pay at work. I have to find more affordable child care. Grocery and gas prices are through the roof. Between overtime and fundraising for my kid’s school, I am never home. Attend the hearing on the coal train proposal? I can’t deal with that now.”)
Now is a good time to highlight what’s at stake — whoever wins the elections in November — Social Security, Medicare, access to health care, reproductive rights, the environment, to name a few.
We can make organizing-related information and training user-friendly: easy to find, easy to access, user-friendly, affordable, compatible with different schedules, and tailored to audiences with different skill levels. An important reason to do this is that learning how to mobilize people power is an ongoing adventure. David Ayala, organizing director for OneAmerica, says, "You can't go to one training or conference and emerge a leader."
Remember when jazzercise and aerobics saturated popular culture? Classes were ubiquitous: at community centers, YMCAs/YWCAs, continuing education programs at the community colleges and universities, and senior centers. Classes were accessible, widely promoted, held throughout the day, and often accompanied by free child care. The aerobics culture thrived outside of classes. You could read all kinds of articles on aerobics moves, health benefits of aerobics, Jane Fonda, etc., in magazines and papers.
We can “aerobicize” organizing. We can focus on providing information specifically for the 99 percent of the 99 percent who are not organizers. For example, we can offer information on: how to identify when the "rules of the game are rigged," such as when the Legislature more regularly scrutinizes state investments in social services than it examines corporate tax loopholes; how and why organizing works; how nonprofit organizations can organize under the law; and how to know if your organization is ready to organize.
People power: It’s renewable. Sustainable. Locally sourced. It is what we need. Right now.

In public his roots are hardscrabble; In private he hates on the rabble ...

Light reading about the presidential candidates , Part I ...

Governor Romney  (Check back for Part II, about President Obama.)

In public his roots are hardscrabble.
In private he hates on the rabble.
Though his donors are elite,
His campaign has been effete -
His talking points meaningless babble.

... and just in time for tonight's (presidential) debate:

Ever wonder how candidates for public office can (and sometimes do) frame their issues to appeal to voters? If so, you may enjoy George Lakoff's article in today's edition of Alternet.

Email ThisBlogThis!Share to TwitterShare to FacebookShare to Pinterest
Labels: campaign, frame, issues, presidential, Romney, voters
Newer Posts Older Posts Home
Subscribe to: Posts (Atom)
"I received an extremely grounded and practical education on ...grant writing I was already familiar with. Your insights and ... examples as well as commentary were so relevant and insightful....You were an excellent and accessible presenter..."
Mari Kim, PhD
Grant Writer
___________________