In Defense of Stunts and Spectacles 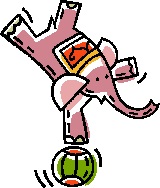 Just read an article that endorsed creative protest as a social change tactic; was inspired to write the following ...

For too long, stunts, spectacles, street theater and such have been spurned by supporters of social change!

Twenty years of working for and with nonprofits on organizing, advocacy, lobbying, outreach, raising awareness, and public education have convinced me that stunts can be serious tools of social change. (If you do them right.) Silliness can be used to spotlight the surreal level of injustice promoted by a particular public policy: Activists can use stunts to get the attention of media, hold people’s attention to issues they might otherwise ignore, and use the attention they attract to make corporations and politicians more accountable to their (activists’) constituencies. And stunts are affordable - more affordable than producing and running TV ads, organizing a statewide lobby day, etc.

Some people worry that stunts are tacky and unprofessional. These folks confuse poorly planned stunts with those that are part of – and shaped by - a larger organizing/advocacy campaign strategy, convey a persuasive message backed by thorough research, and are well-executed.

So, to all of you citizen activists: Supplement your social change campaigns with some strategic silly. Some spoof. Some spunk! Here are some hypothetical examples:


Get silly, activists! Because you mean business.

Email ThisBlogThis!Share to TwitterShare to FacebookShare to Pinterest
Labels: anti-austerity, austerity, protest, social change, street theater
Newer Post Older Post Home
"I received an extremely grounded and practical education on ...grant writing I was already familiar with. Your insights and ... examples as well as commentary were so relevant and insightful....You were an excellent and accessible presenter..."
Mari Kim, PhD
Grant Writer
___________________