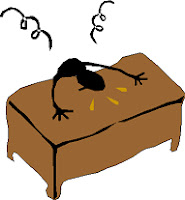 If you're a grant writer, you're likely to say "complete a grant application," after which you might ask, "How does a grant writer organize the work of all of the villagers?"

Here's an example of what I mean:

ABC Homes, a nonprofit developer of affordable housing, applies for funding to create a community garden on one of its properties. The garden ABC installed last year, on another property, was a huge success. Data collected by staff show that almost all of the property’s residents: 1) plant and tend the garden, and 2) report significantly increased access to fresh produce, significantly increased consumption of produce, and reduced food bills.

The grant writer (GW) needs help assembling the grant application, due on December 1. She asks:
She asks for these by November 28.

Fast forward:
Suffice to say that GW left work at the end of the day looking considerably more wan than she did at the beginning.

The Grant Writer's Sanity Saver is a tool that can help grant seekers avoid these kinds of situations. It is a work plan template that helps:
How to use it:

Here's an example of the application of the Sanity Saver, using the example above.

Prospective Funder:
Application Due Date:
Decoy Due Date (This is your organization's internal target completion date: It reminds you to schedule each task to allow for unexpected delays.):


The "Status" column is useful if the grant writer calls more than one meeting. It can give you an opportunity to identify problems with the plan's execution - in time to do something about it.


If you have other sanity savers for grant writers, I'd love to hear about them.
Posted by Lisa Arnold

Email ThisBlogThis!Share to TwitterShare to FacebookShare to Pinterest
Labels: clear communication, deadline, funding, grant writer, group effort, lead time, sanity saver
Newer Post Older Post Home
"I received an extremely grounded and practical education on ...grant writing I was already familiar with. Your insights and ... examples as well as commentary were so relevant and insightful....You were an excellent and accessible presenter..."
Mari Kim, PhD
Grant Writer
___________________